Artechno is designing a system to fully automate the growth of plants. The leaves are harvested and bagged. Then the tray’s need to be emptied of the dirt and roots that remain. Once the plugs are removed the tray will be thoroughly cleaned by a washing machine before it is once again inserted in the growth machine. The plants are grown in several different types of trays. This cleaning is currently done by a man banging the tray against the wall of a bin. The plugs pop out of the tray and the tray is then placed into a washing machine.

To fully automate this system the man emptying the trays by hand needs to be replaced by an automated system. The trays arrive on a conveyor belt in a so-called bench, which is basically a bigger tray that contains four trays with plants. The plants need to be forced out of the tray, inspected by vision, and then the tray must be placed in a washing machine. The pick-up system for the tray’s has to be universally applicable on different interior tray designs. The outside rim of the tray is a standard design.

We have designed an end of arm tool that picks up the tray using the four holes on the outside rim of the trays. The robot arm then moves the gripper and tray above a bin, rotates the tray upside down. The tray is moved upwards to the ejector. The pins on the ejector force the plant plugs out. After that we use a Cognex camera to check if all the plugs are truly removed. If this is not the case, the robot will go back to the ejector again. When all the plugs have been removed the robot deposits the tray in front of the washing machine. The robot waits for a signal from the washing machine, when the signal is given, the tray is pushed into the washing machine. Because there was no washing machine available during our demonstration, the signal is simulated by a button.

Our main problem was the end of arm tool. This needed to be a precise instrument, but it was also important that it is light, maximum of 3 kg. Our first design was made out of 25 x 25mm tubing, 1,5 mm thick aluminium. However, this proved to be too frail. The tube was too thin to allow proper welds. As a result, it broke and suffered from deformation which meant it wasn’t precise. Our second prototype was made from stainless steel, 35 x35mm and 2 mm thick. We very quickly realised that this wouldn’t do either. It was too heavy for the robot arm, despite the calculations pointing to the opposite. The third version is made from 2 mm thick aluminium tube, 35 x 35mm. This allowed for more weld surface the ensure strength. In hindsight it became appearend that during the testing of our second tool, the robot was malfunctioning due to internal wear and tear. This could mean that our calculations could very well have been correct. However we never got around to testing that again.

What we would do differently next time

For the vision we started out with a white background, placed the tray and used a camera to detect if there were any dark blobs present. When we started testing with actual plants we quickly realised that this system didn’t work. Even if the tray didn’t contain any plugs there were still leaves spread over the tray which were being seen as blobs. We solved this by making our background pink and counting the amount of holes visible in the tray. This could have been easier if we had placed the tray above a light as that is a more stable option.

The ejector system works. However it could be improved upon. The pens that push into the tray would work beter if they had a larger diameter. This would really force the plug out of the tray. It is also worth experimenting with pointy pens or just flat heads. When a lot of roots are present. The pointy version might be better at ripping through them. However there is also more risk of the pen just pushing into the plug and not forcing it out.

The fingers on our gripper could have been designed with a bit more care. We have been forced to make a lot of adaptions to the fingers when we started testing. This was in part to reality being a little different from the CAD drawings and in other part because we made the mistake of not designing the fingers to be adaptable to imperfections on the end of arm tool. When the produced tool varied a little from the drawings we were no able to use the fingers we had designed forcing us to once again make new ones.

At the end of the line, we delivered a proof of principle for the emptying of tray’s using a robot arm and end-of-arm-tool. We picked up the tray from a bench, removed the plugs, checked this using vision tools and deposited the tray in the washing machine. All four of us are mechanical engineering students, so the coding part proved to be the difficult part we had to live up to. We all learned a lot of useful skills we can apply on our next projects.

The team want to thank Sjors van Leeuwen, Tom van der Meer, Martin van Zanten and Jeffery Arkesteijn, from the company Artechno, for providing supporting in the testing phase of this project. We also want to thank the supervisors from The Hague University of applied sciences, Thijs Brilleman and Mathijs van der Vegt. We want to thank them for their advice and help during the project. 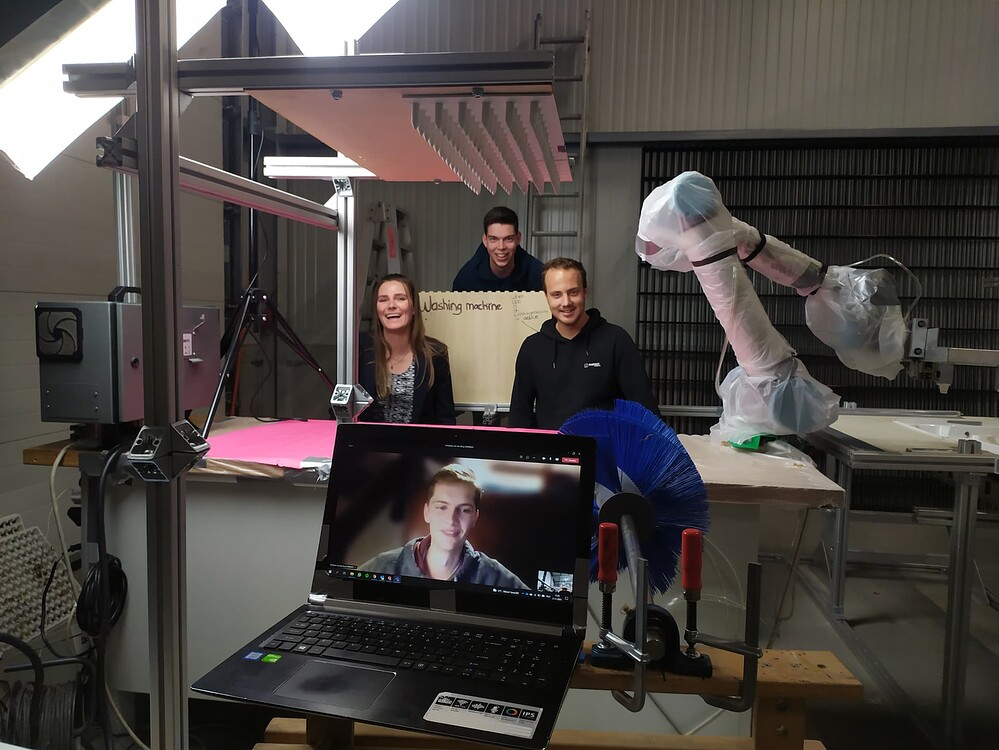