For the production process of radioactive isotopes, a special box or cylinder is used to limit the dose rate to their surroundings. Within is an extra shielding container or canister for the protection against radioactive dosing of the radioactive isotope. These boxes or containers are called Package Shielding Body’s (PSB) As seen in figure 1. 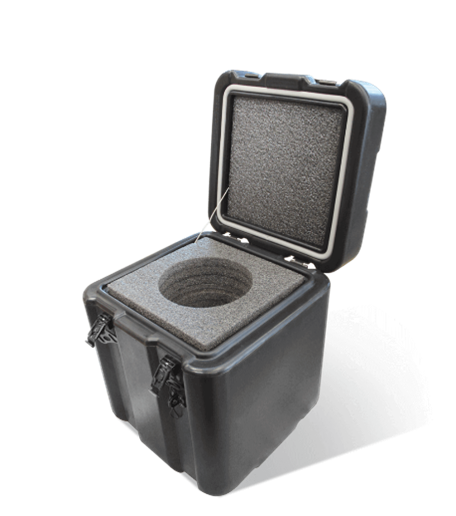 Figure 1: example of a PSB.

Due to the many procedures to ensure human safety and due to a chance of leaked contamination, this process is often long and dangerous. Also if the frequency in which contamination is found is somewhat high, this procedure can add up to a unacceptable high and unhealthy radioactive dose on the operator. That’s why there’s a huge demand to automate this process to ensure the safety of the operators. The following assignment is asked to us as students of the minor Smart Manufacturing and Robotics: ‘Make a working proof of principle to automate the wipe test’. For this it was necessary to detect if the PSB is a box or a cylinder in order to simulate the different sizes and forms available on the market for PSB’s. furthermore a end of arm tool must be designed to pick up a wipe and perform a wipe on the PSB. And last a force variable and measurement must be done to conclude the needed force to wipe the casket.

For this problem a proof of principle is made with a Doosan Robot. This because the Doosan has a precise force measurement tools built in. Especially compared to other robotic arms such as UR5 and UR10. Due to the dangerous side effects of radioactive substances, this proof of principle is completely done without the original PSB’s or radioactive isotope and instead uses boxes and cylinders to simulate the situation.

The End of Arm Tool (EOAT)

To pick up the wipes and to perform a wipe, we designed an End of Arm Tool. This tool picks up the wipe with the needles as seen in the figure. The wipe consist of a soft wiping area strengthen with a a harder foam like material. This foam like material will be picked up by the needles of the End of Arm Tool. This gives enough strength to also perform the wipe without the wiper falling off. Also no air flows are used to ensure no further contamination is possible in order to make the simulation as close to the real situation as possible. The pneumatic cylinder is used to push wiper of the End of Arm Tool. This so the used wiper can be thrown away and a new wiper can be used for a new wipe test. 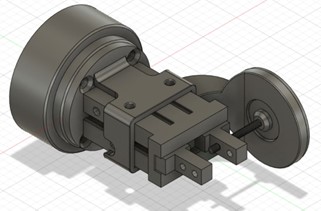 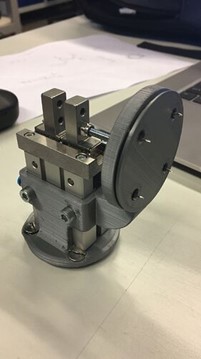 To detect whether the PSB is a box or a cylinder, vision is used to detect the contours and define the needed wiping path. The software recognizes the centre of the circle and sends these coordinates, with a connection between the python file on a computer and robot,  to the Doosan Robot. The Doosan Robot then converts these ‘pixel’ coordinates to so called Robot coordinates so the robot knows the position where it needs to move in order to wipe the surface of the simulated PSB’s. 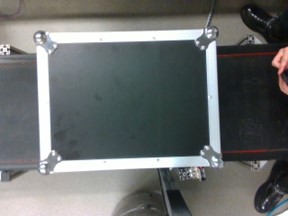 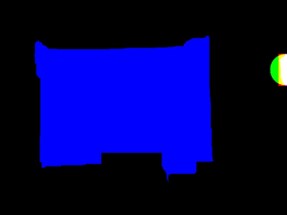 Figure 3: Detection for the box, picture and detection. 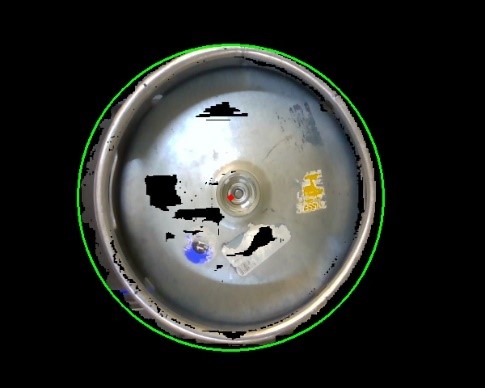 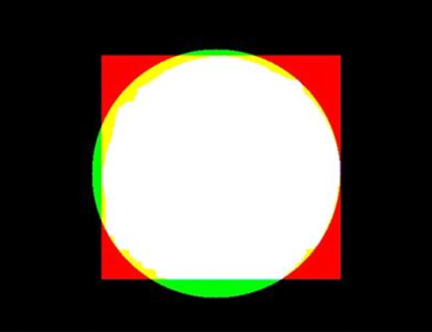 Figure 4: Detection for the keg, edited picture and contour detection

Figure 5: The code sending the center-coördinates and keg type.

The force feedback was made using the Doosan robot arm with the DRL studio as IDE. The Doosan uses Python script with a specific library DRCF. This library has functions which control the robot every movement. The “set_desired_force()” allows the controller to set the forces in every direction and even following the tool direction. The arm is first position above the object and the desired force is set. Afterward the arm will be moving slowly downwards until it reaches the surface of the object. It will keep moving even when it reaches the surface just until it measures the desired force. It will move up and down to try and keep in in the range of the force. While the force is set, every movement will be done with this pattern. The pattern will turn off when it read the line “release_force()” which will stop the Force feedback. 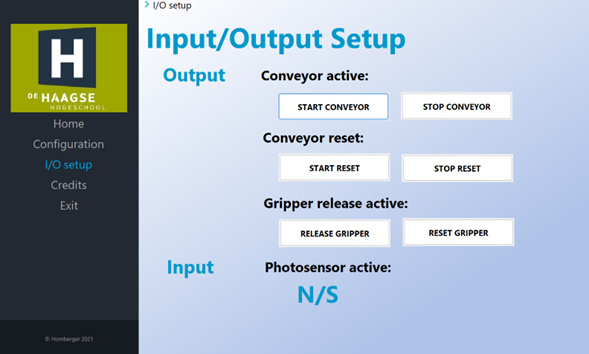 The human machine interface (HMI) also was made using DRL studio. The software has, when using the Checkapp library, an entire area for designing a Human machine interface that can be uploaded to the control tablet. The Force feedback can be followed through the entire process on the HMI. Whenever the script starts running it will call upon the HMI which is uploaded with it. 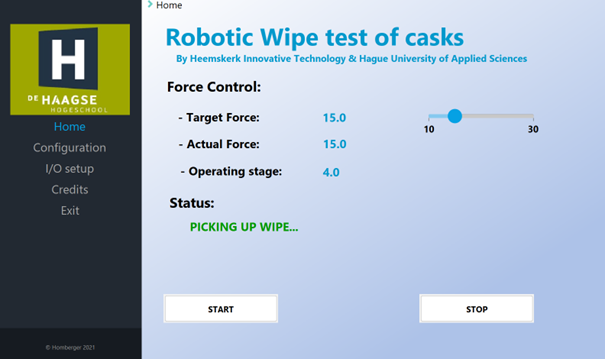 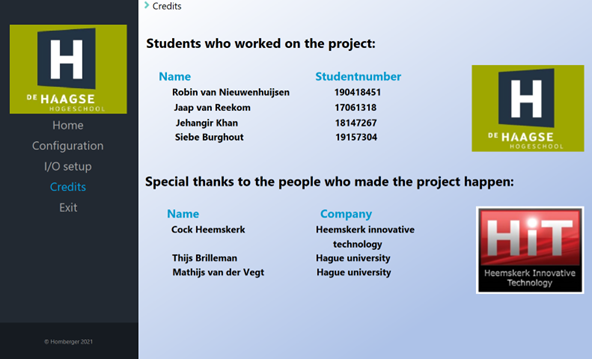