DERO GROUP is a company located in Nieuw-Vennep with a specialisation in automation of production processes with robots, especially in the food industry. Our client is Bosgraaf, a division of DERO GROUP located in Joure, Friesland.

The assignment we received from Bosgraaf is part of a larger project, where they want to automate the filling, rolling and packing of wraps. Employees currently stand next to a conveyor belt to manually perform certain functions. Instead of programming one machine that automates everything at once, they want this project to work with different modules that are placed along a conveyor belt. The intention of these plans is that each module takes on a smaller task. This way every module can be integrated individually, which makes the automation more gradual, instead of having to replace the entire conveyor belt as a whole. Another benefit is that if something goes wrong, they only have to investigate a single module. The cobot we make is part of such a module.

To solve the problem, we designed and produced a new End-of-arm-tool (EOAT) for the cobot. This can be seen in the figure below. 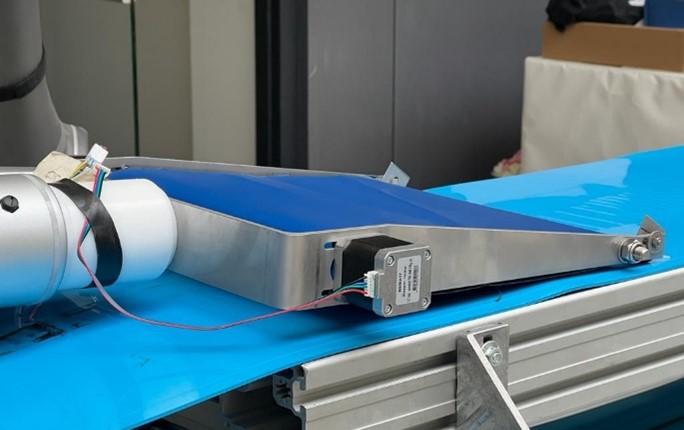 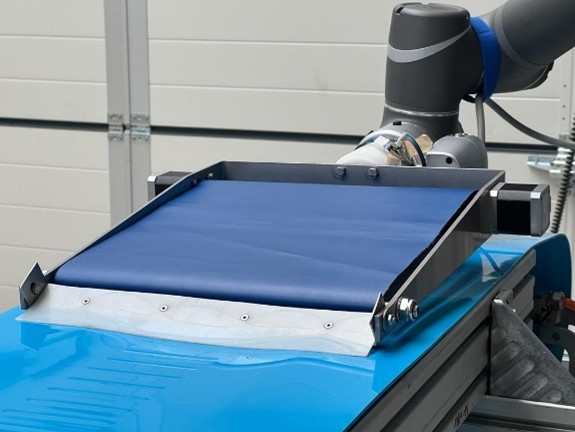 This EOAT consists of three important parts: an integrated roll band, two stepper motors and a thin lip on the front. The function of these parts is displayed below.

Function of the parts

How does it work?

The system can be started by using a Human Machine Interface (HMI). The wraps are supplied on the first conveyor belt. When the vision camera detects the wrap, it will send a signal to the cobot. At the same time a photo of the wrap will be taken and a live image of the wraps will appear on the HMI. The cobot is then moved to its starting position to pick up the wrap from the location the vision program has determined. After the wrap has been picked up, the cobot moves toward the second conveyor belt and puts the wrap down, without food falling off.

This process is continuously repeated.

The cobot’s own program is TMFlow. We used this program to start a listener on the cobot which then listens to commands we send it. We do not use TMFlow for the operation of this procedure, because it is a visual program that becomes cluttered very easily. Instead, ROS and Python were chosen because it gives more freedom and options to the actions that the cobot can do.

For the vision we used openCV. We used contour detection to detect the wraps arriving on the conveyor belt. Once the wraps are detected, their speed will be calculated so our program will be able to predict the wrap’s position. This means that the camera does not need to detect the wrap at the point of pickup, where it might be obstructed by the cobot itself.

The biggest challenge in this project was designing an end of arm tool that could consistently pick up the wraps, without any filling falling off.

With the current setup, the cobot takes about eight and a half seconds to move a wrap and go back to its starting position. However, it is possible to get this to 4 seconds per wrap with the following adjustments:

The main goal of this project has been accomplished. An end of arm tool has been designed and produced that can move unfolded wraps from one conveyor belt to another with a 90 degree turn, without any food falling off.

We did not achieve the speed of 15 wraps per minute with the prototype. However with a few minor adjustments described in the “major decision” part of this article.