The client ‘Landuwasco B.V.’ deals in revised Industrial laundry equipment and in integration/robotization of the laundry industry. The customers of Landuwasco are industrial laundries. These customers average have a production of 300.000 kg of laundry a week. These productions are only available due to the automation of many processes. Though there is still a lot of improvement possible in the industry. Although there is still lots of human intensive physical work needed to reach these production numbers and are not yet automated. This is due to the complexity of the amorph structure of laundry. 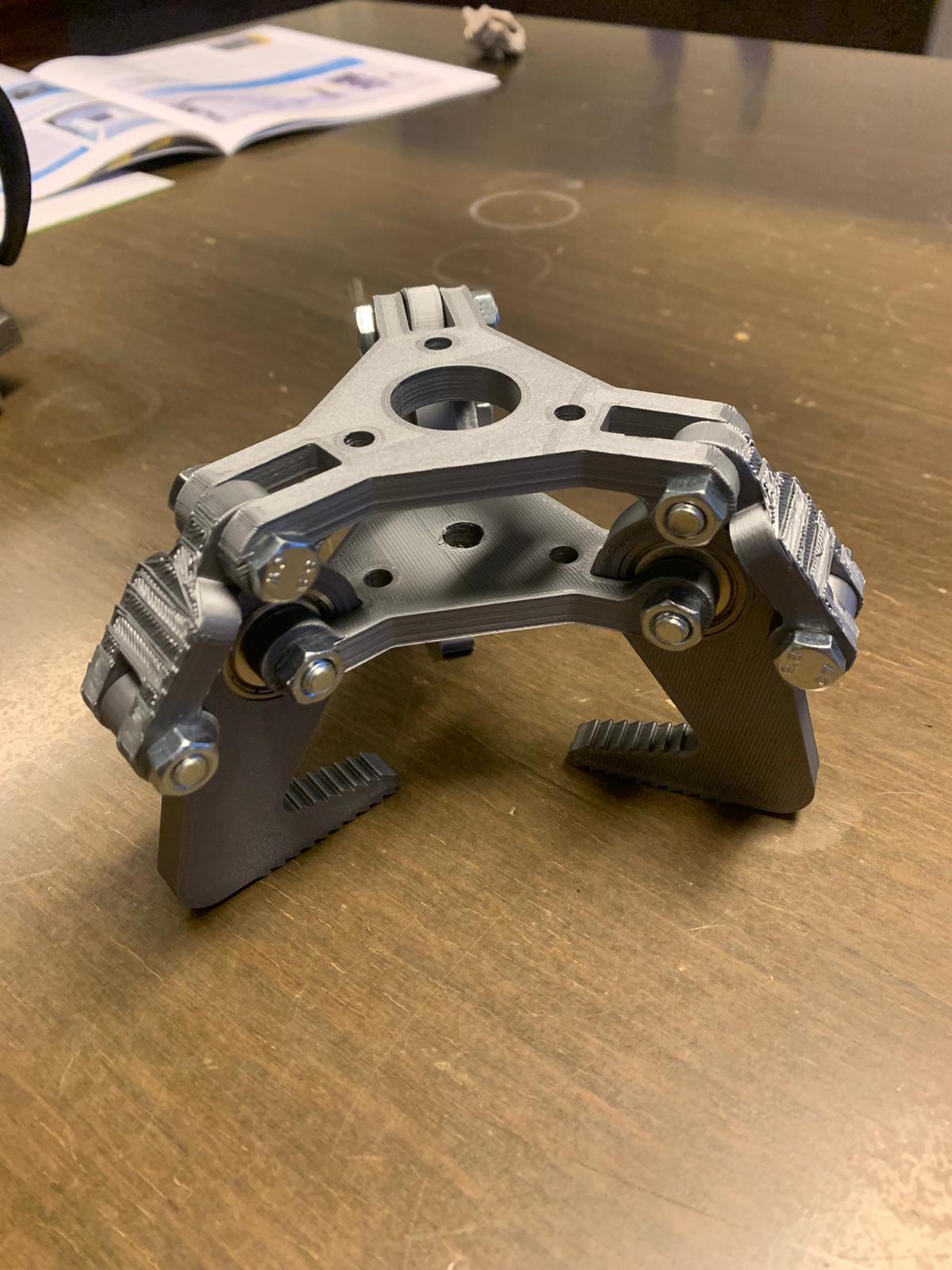 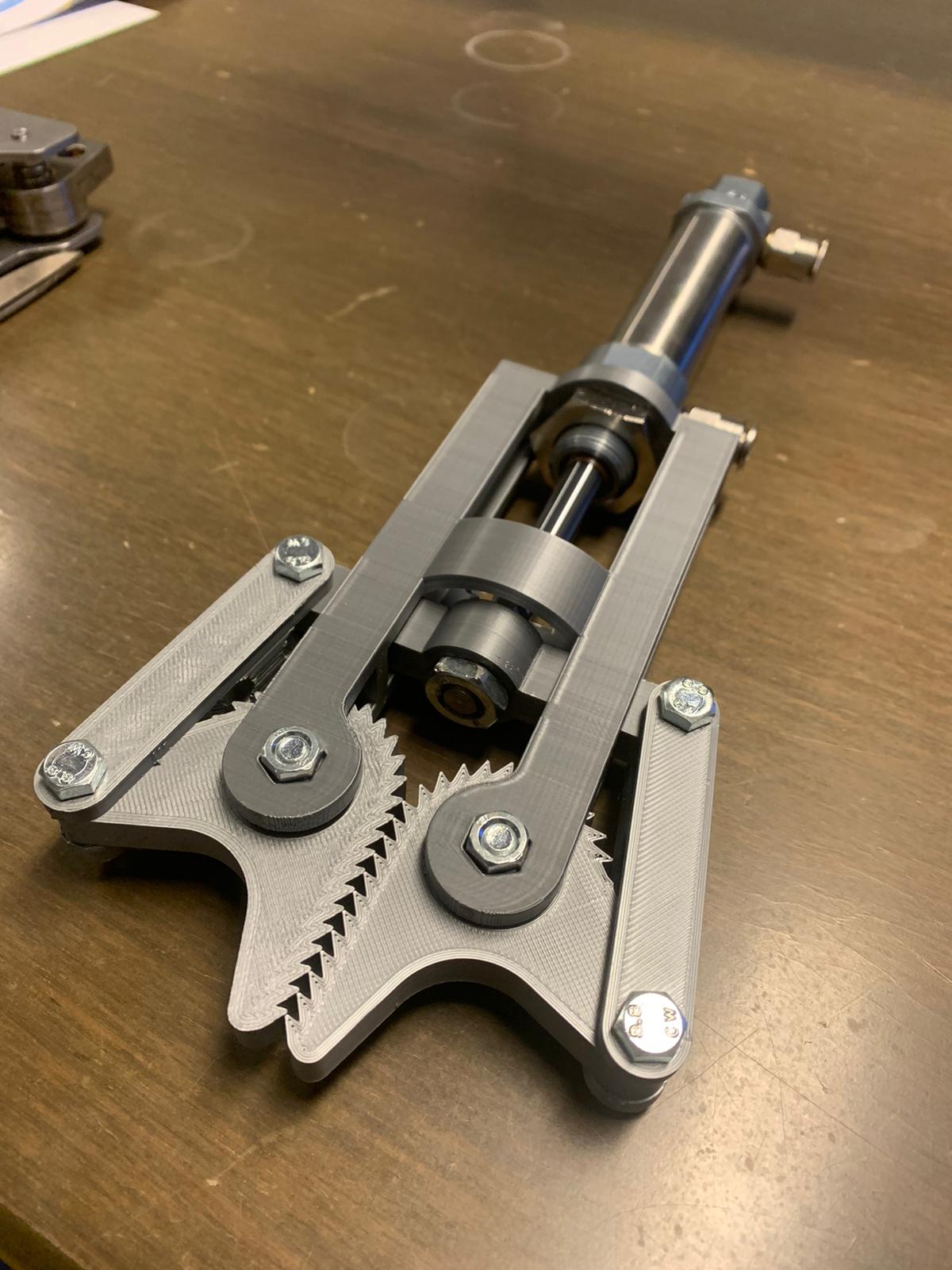 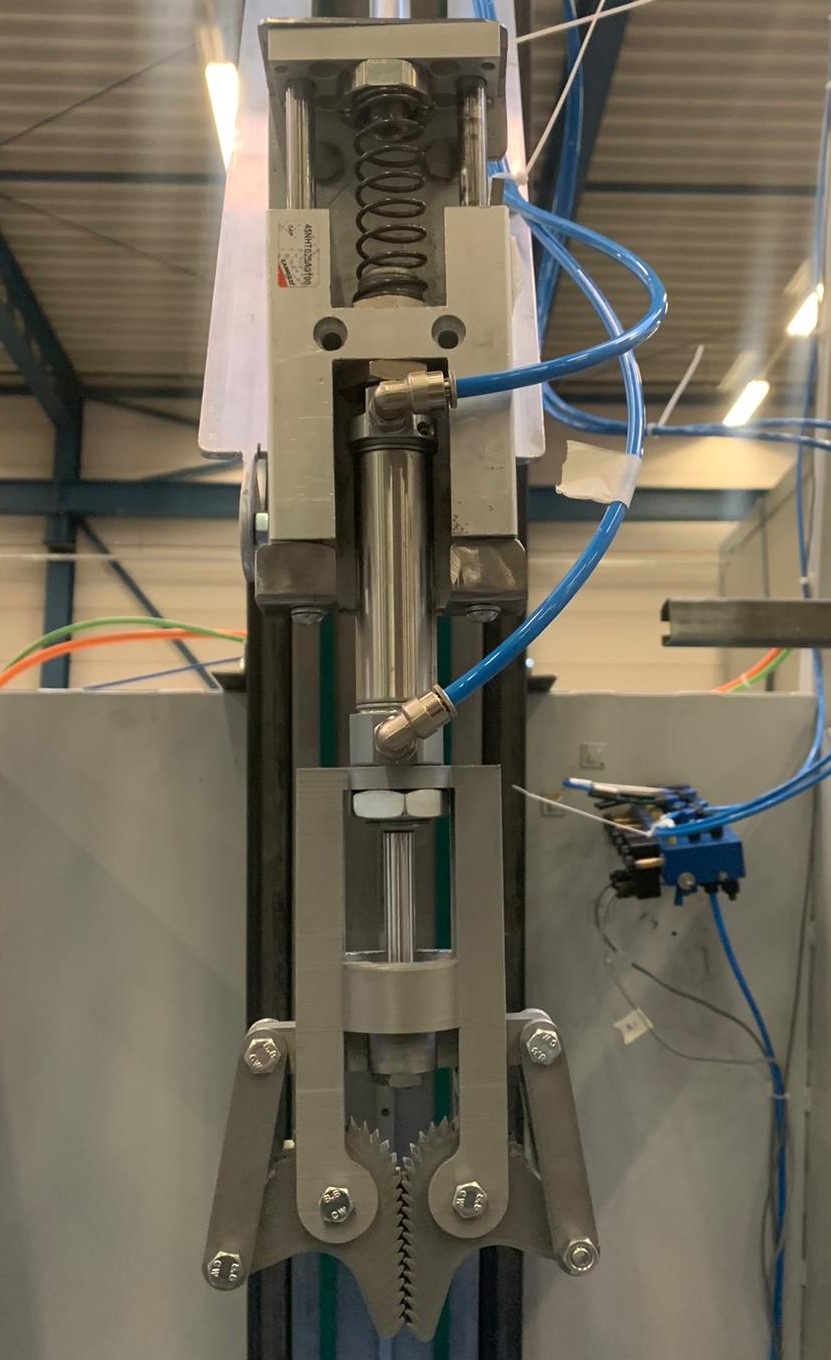 A batch of towels has an amorphic structure meaning that no towel batch is the same. The situation becomes even more complicated when the towels will be wrapped in each other. This means that there is a certain grip strength needed to pull just one towel out a batch.

One of the first challenges was designing the End of arm tool (EOAT) that firmly holds on to what little fabric it grabbed. The eventual design pulls the fabric upwards and inwards where it will be secured by the clamps.

The second part of the EOAT is the connection between the tool and the robot arm. This part has the purpose of keeping the tool perpendicular to the surface of the conveyor belt. It also has safety measurement built in which prevent the to tool from high amount of stress when the software sends the arm too far into downwards. This is accomplished with a spring mechanism and a limit switch.

While the spring takes up most of the force applied on the tool the limit switch will stop the arm from moving any more downwards.

For the picker the arm needed to have a combination of high movability and a long reach. For this a 2-dimensional Delta robot design was chosen which move along a track. 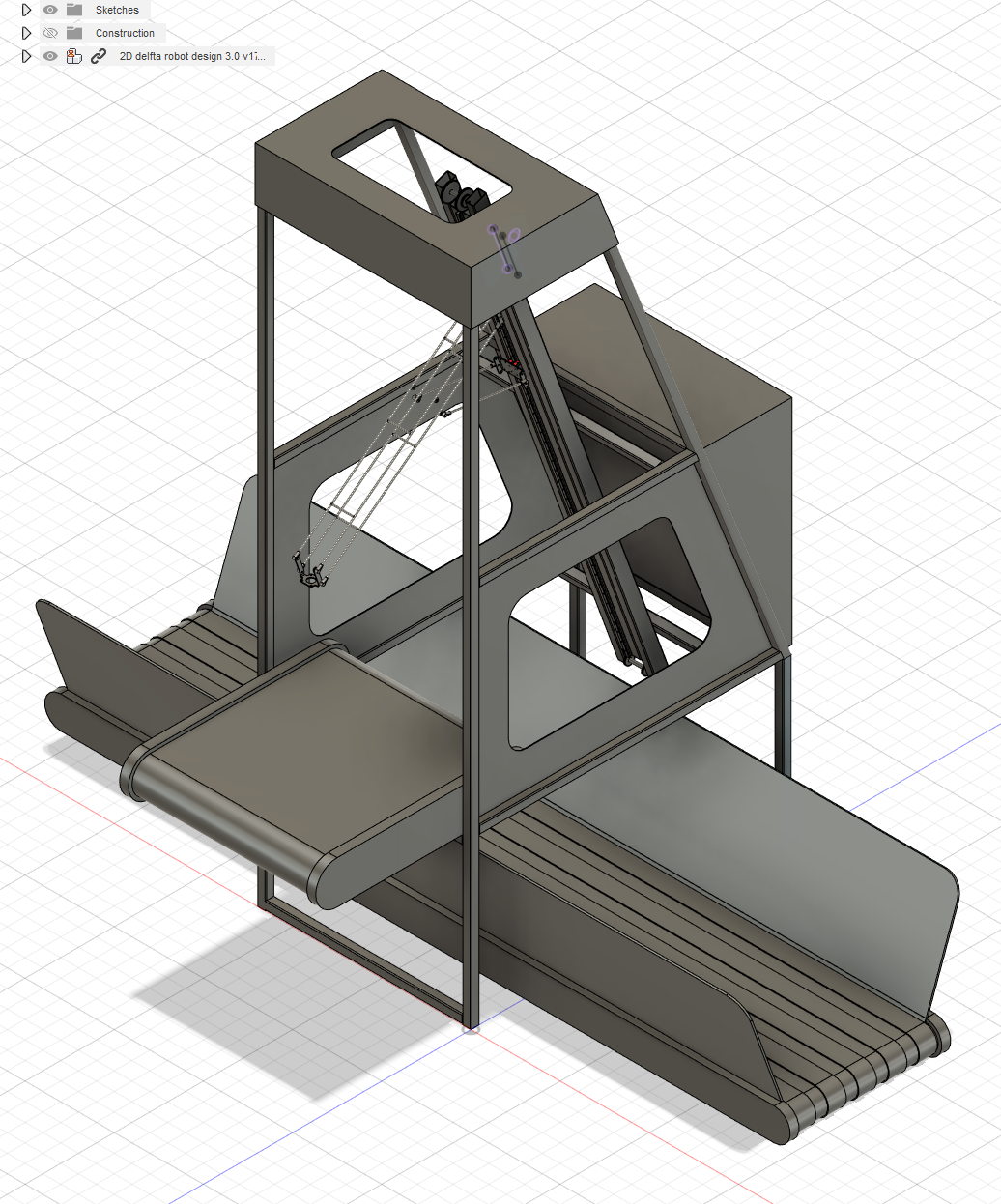 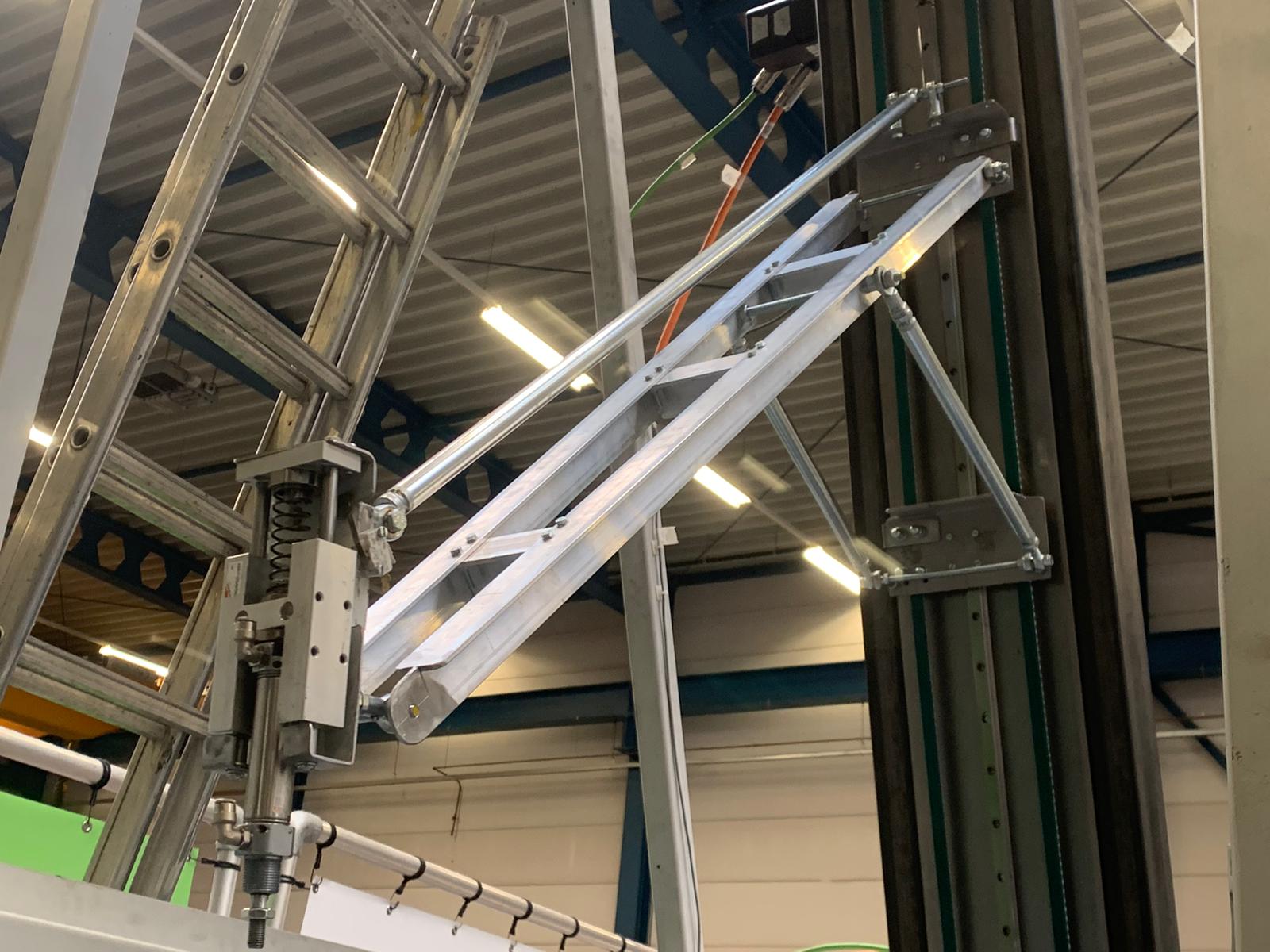 the track allows the arm to move freely up and down. The robot has one long arm and one short arm. With this the robot has a much larger reach then a basic Delta concept. For the third dimension a conveyor belt has been used.

During this project, we had lots of challenges including in the vision. At the start of the project we had to choose whether we would’ve liked to use machine learning for detecting the towels or implement vision. The project started by experimenting with machine learning using the YoloV5 algorithm. We got some nice results out of this as is seen in the pictures below.

The idea was to use the middle point of the drawn rectangle to determine it’s picking point. The downside was that when the towels were located as an U-form, the picking point would be wrong. After some discussion with an expert from Smart Manufacturing and Robotics, came the advice to use vision instead of machine learning. The vision software is created in python and tested on a different conveyer then the eventual setup for the robot. The results were amazing as are seen below.

When implemented in the setup, unfortunately did not have the results we hoped we had, but had not enough time to optimise this perfectly. Some improvements can be made in the lighting, the filters and contour recognition. However the results were still good and we still managed to get great picking points from the vision as is seen in the video.

At the end of the project the robotic picker was fully build and integrated in the frame of the robot. The vision was capable to detect towels, trace around them and place a location. These coordinates in combination to the measured height around that spot would be use on the plc to determine where the robot will move to. The entire setup with the vision and kinematics have been integrated. Though the robot hasn’t been tested to move at the speed it would be able to theoretically at. It been able to pick up towel reliably.