The goal for this project was to make a system that can pick up kalanchoes (type of potted plant) from a conveyor belt, put them into a tray using a robot and check their placement with a vision system. The system was designed for the company SV.CO. Currently, only three employees at SV.CO put kalanchoes into trays, which is too few compared with the goals of the company. Therefore, SV.CO wanted a packing system that can fill Kalanchoes without a protection cover.

The main challenges of the assignment were:

The system consists of five modules:

Image 1: Overview of the system

The collector is attached to the end of the conveyor belt, where the kalanchoes will be stopped mechanically at a correct distance. In Image 2, the mechanical flippers and the sensors that detect if there are five Kalanchoes ready to be picked-up is shown. 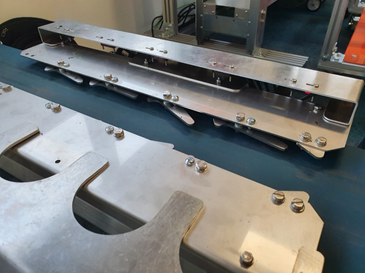 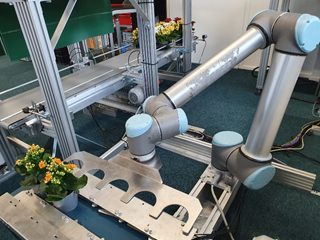 Plant Separator:
The plant separator consists of four pneumatic pistons and two screens. These screens drop down to push the leaves away from the holes. This way, the leaves of the already placed plants will not get crushed when the next row is being placed. Each screen has a horizontal and a vertical piston. After one row is placed, the screen drops down (vertical movement) and moves the leaves back (horizontal movement). In Image 4, the pistons and the guider rails are shown. In Image 5, the screen is down and moves the leaves back. 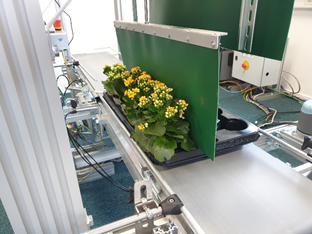 After the tray is filled, it moves on to the vision cell where it is checked for correct placements. It will be checked for empty holes, misplaced kalanchoes and for color of the older plants. If a kalanchoe is misplaced or a hole is empty, the system will recognize it and notify the user by lighting up the red LED (Image 7). If the tray is filled correctly a green LED will light up (Image 7). In image 8 is shown what the vision program output is. A correctly placed kalanchoe is marked with a green square. An empty hole or a misplaced Kalanchoe will be marked with a red square. 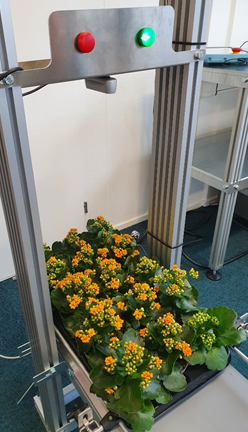 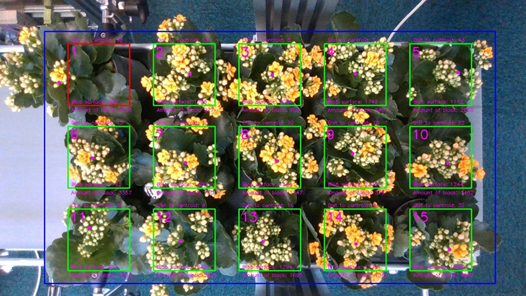 Human Machine Interface:
On the Human Machine Interface (HMI) information about the system will be displayed. This includes for example the status of the system, system statistics and the detected placements of the vision system. For this system it is possible to set what color flower needs to be placed where. The PLC will check the input of the vision system and determine if the flowers are placed in the correct position in the tray.

At the start of the project we wanted to add two more modules. One to take the kalanchoes from the product carriers and a buffer zone where the plants would be sorted acoording to their characteristics. Because of the limited time and delayed with deliveries, we made the decision not to add those two modules. Also, we decided to place five kalanchoes at a time to reduce the cycle time compared to placing three kalanchoes at a time. Also, the robot is not very quick. This also reduces the cycle time.

As a group, we are very satisfied with our achievements in this period of seven weeks with only three students. Also, we are happy with the support from Martin Stolze B.V.. We had a lot of freedom building this system and had lots of resources available at the company.

After testing it was concluded that on one side of the separator system the leaves were being damaged. The test results will be considered in our follow-up project, which will be carried out at Martin Stolze B.V. as well.