In the Signature Foods factory, Homann salads are repackaged from supply boxes to retail packages. These retail packages look more aesthetically pleasing in stores. At the moment, workers repackage these individual salads by hand. This is a costly process as humans are more expensive than machines. The other thing is that humans need pauses whereas machines don’t. 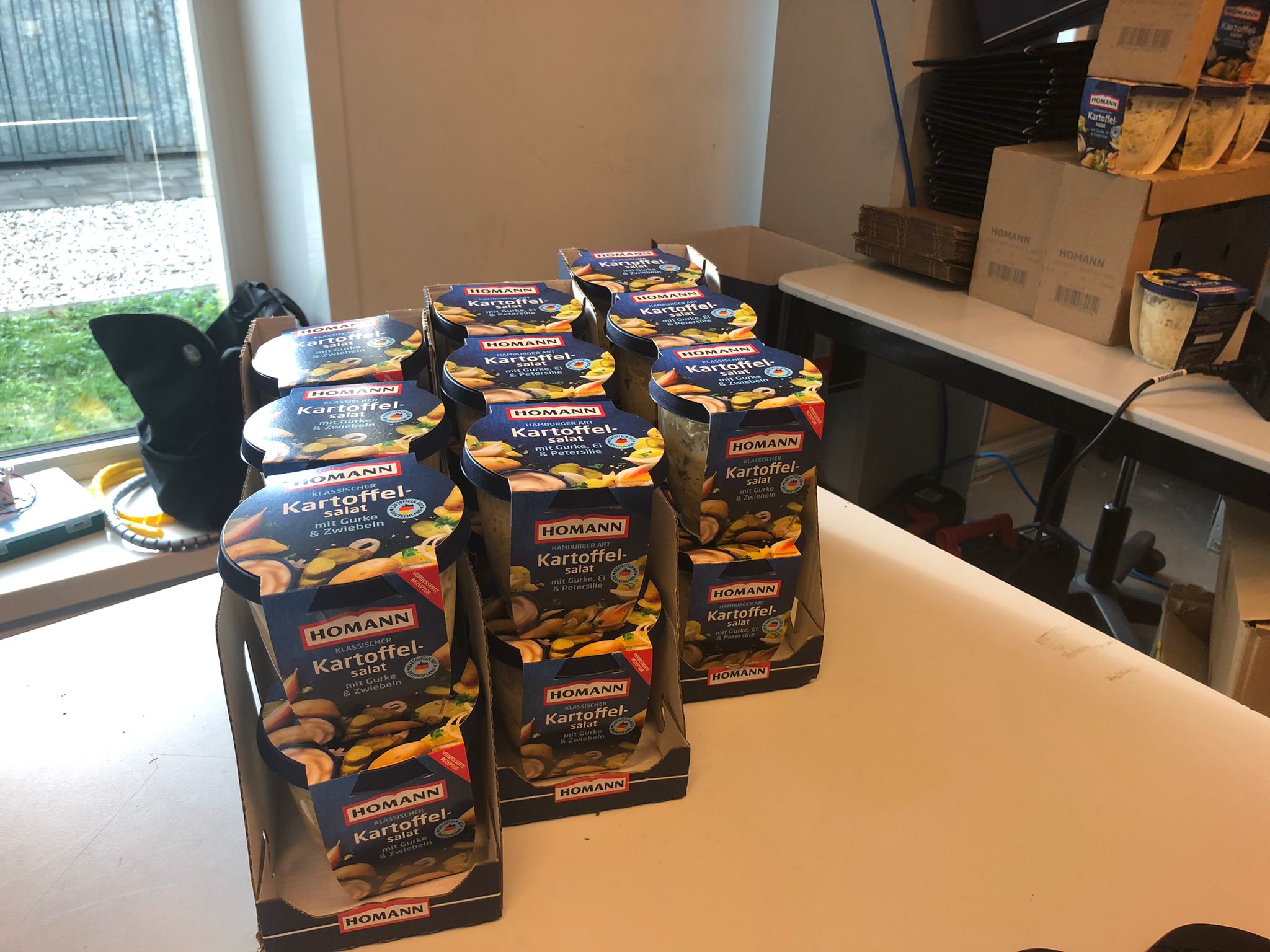 Signature Foods, bringer of many different kinds of foods asked us to design and develop a robot assisted system that would repackage salads, a repetitive task. Currently this is done by hand, but because of shortage in workers they were curious about an automated system.  And this is where we come in.

Automation can be a faster and cheaper solution in the long run, this project was mainly to test the first aspect. Besides, robots can work continually in comparison to humans.

So our assignment is to develop a potential system that automatically moves and places the salads into the retail boxes, boxes that the consumer can find within the store. A single retail box contains twelve salads. For this system there need to be two different kinds of configurations; one containing three flavors, four of each and one that is consisting of two flavors, six of each.

Our biggest challenge will be the speed at which we have to move the salads. We want to have an output of 5 retail boxes per minute and this comes down to 60 salads per minute. Thus, requiring an effective way to pre-sort the smaller boxes and carry as many salads as possible in a single move.

The most important part of our mechanical design is the end of arm tool (EOAT in short). This part of the system needs to do the following tasks:

Individual salad grabbing system, done by using suction cups and cilinders to move up and down.

And contain the vacuum generators, if the tube gets too long they will lose power. 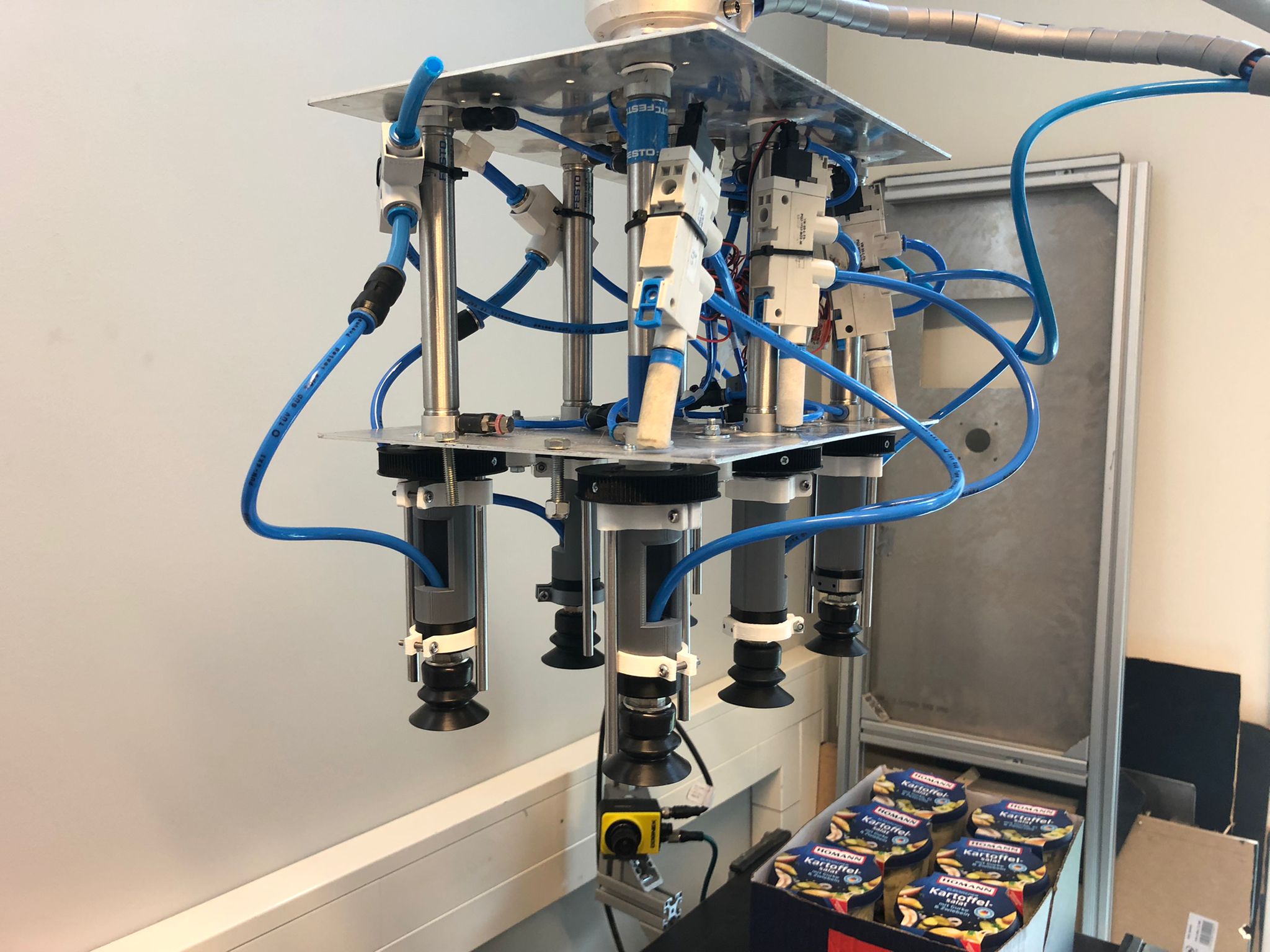 For the vision there were two types of setups used, a Cognex camera which can process images on its own and give a signal. This system was used to check orientation of the retail packages. This is done by checking if the package contains a red logo, if not it is placed backwards on the conveyor belt and the robot needs to compensate for this. 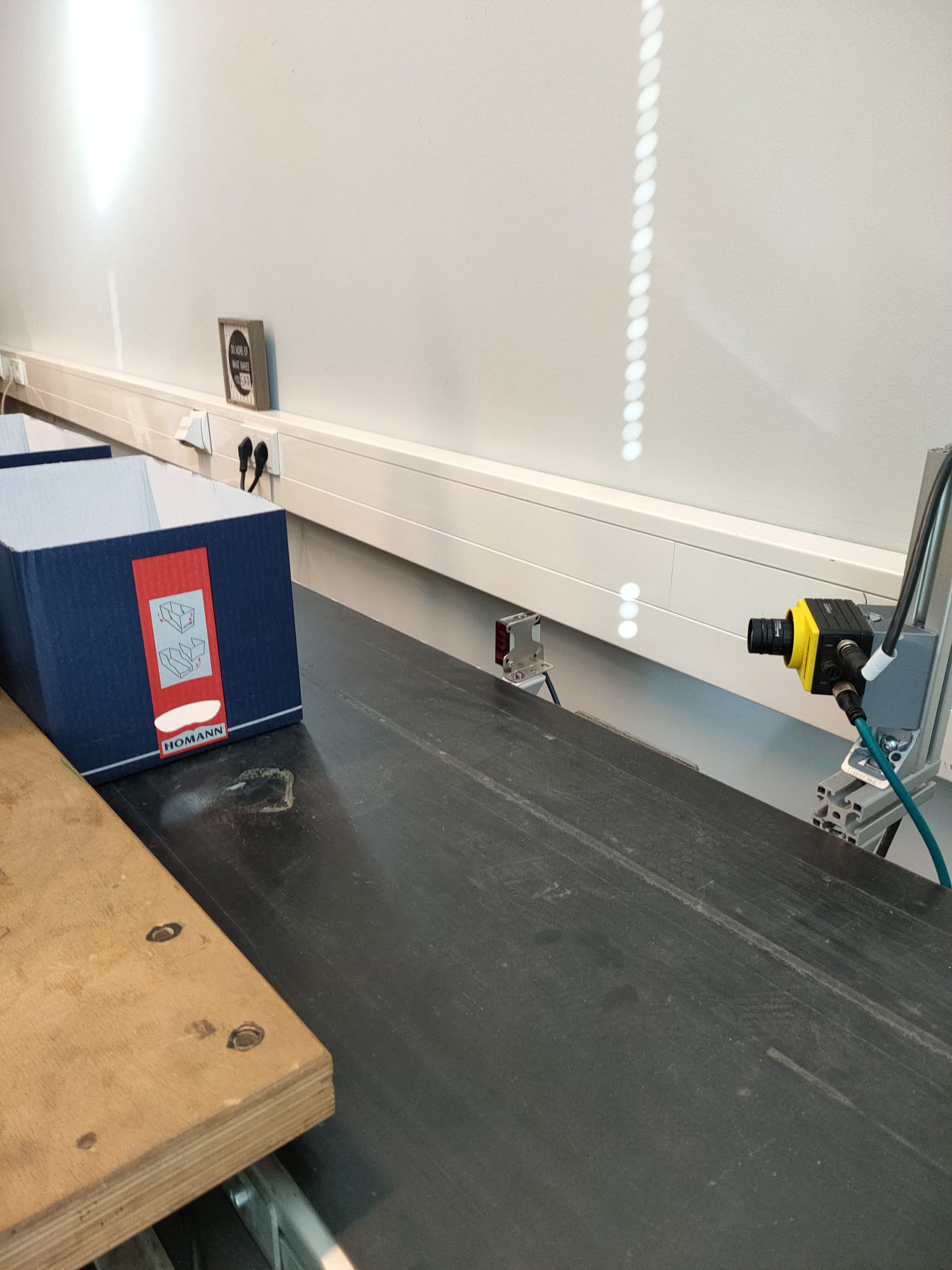 The other system consisted of a webcam and a python script running on a laptop. This system checks if the smaller boxes contain salads and if they’re up straight, the salads can tip over quite easily. 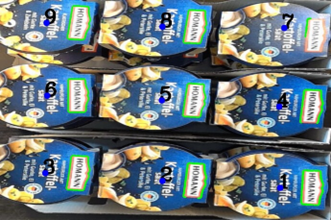 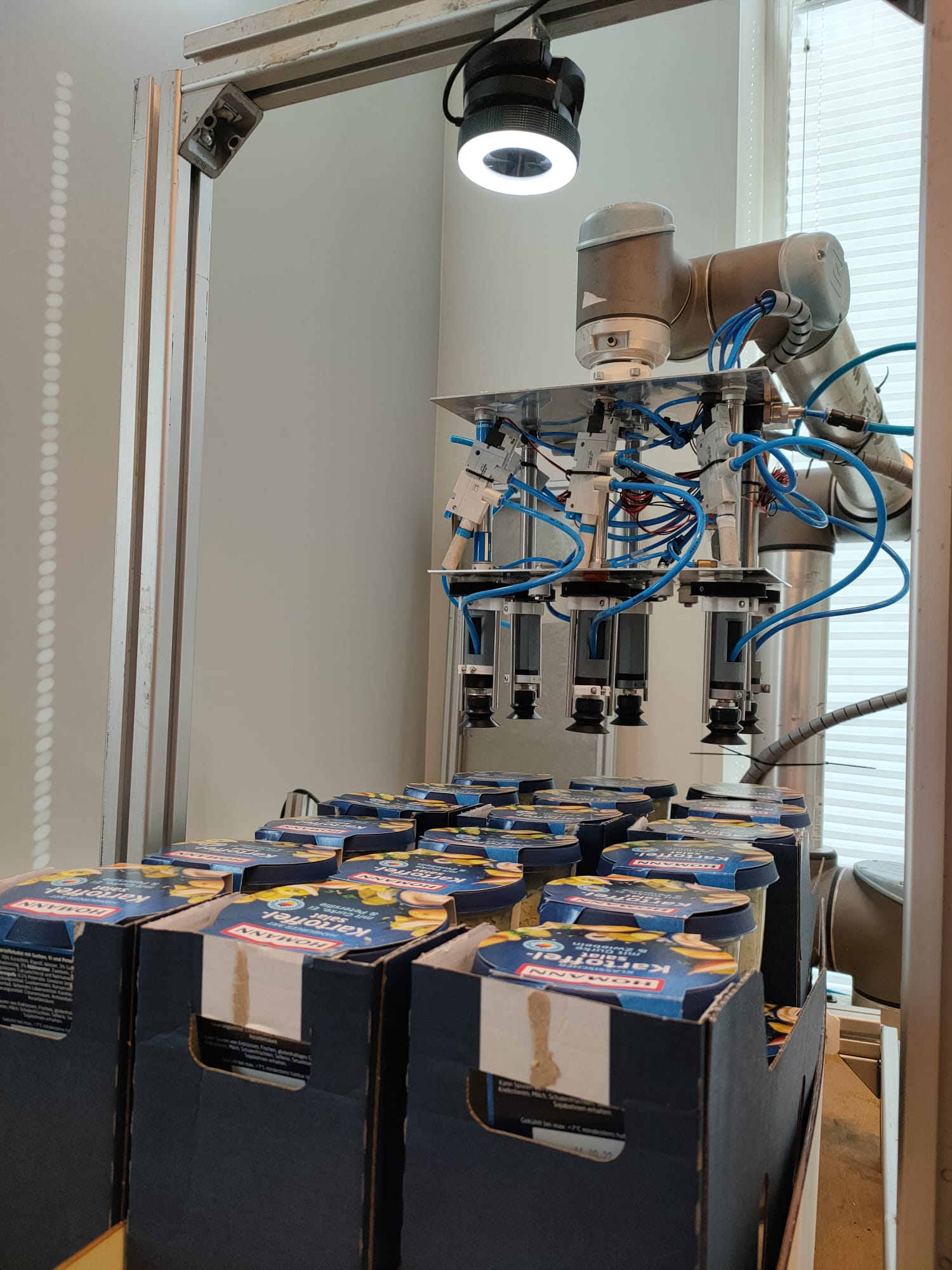 To drive and manage all the electrical components and signals we opted for a Siemens PLC. This component sends the required positions to a laptop which then sends the appropriate coordinates to the robot. The PLC also controls all four of the conveyor belts; a single big one which moves the retail boxes and three smaller belts which move the smaller boxes. The smaller conveyors are self-made by using rollers and a fiberglass reinforced belt with 3D printed pegs.

The PLC also manages a GUI, Graphical User Interface on a Human Machine Interface (HMI), this interface allows the user to select one of the two desired configurations. 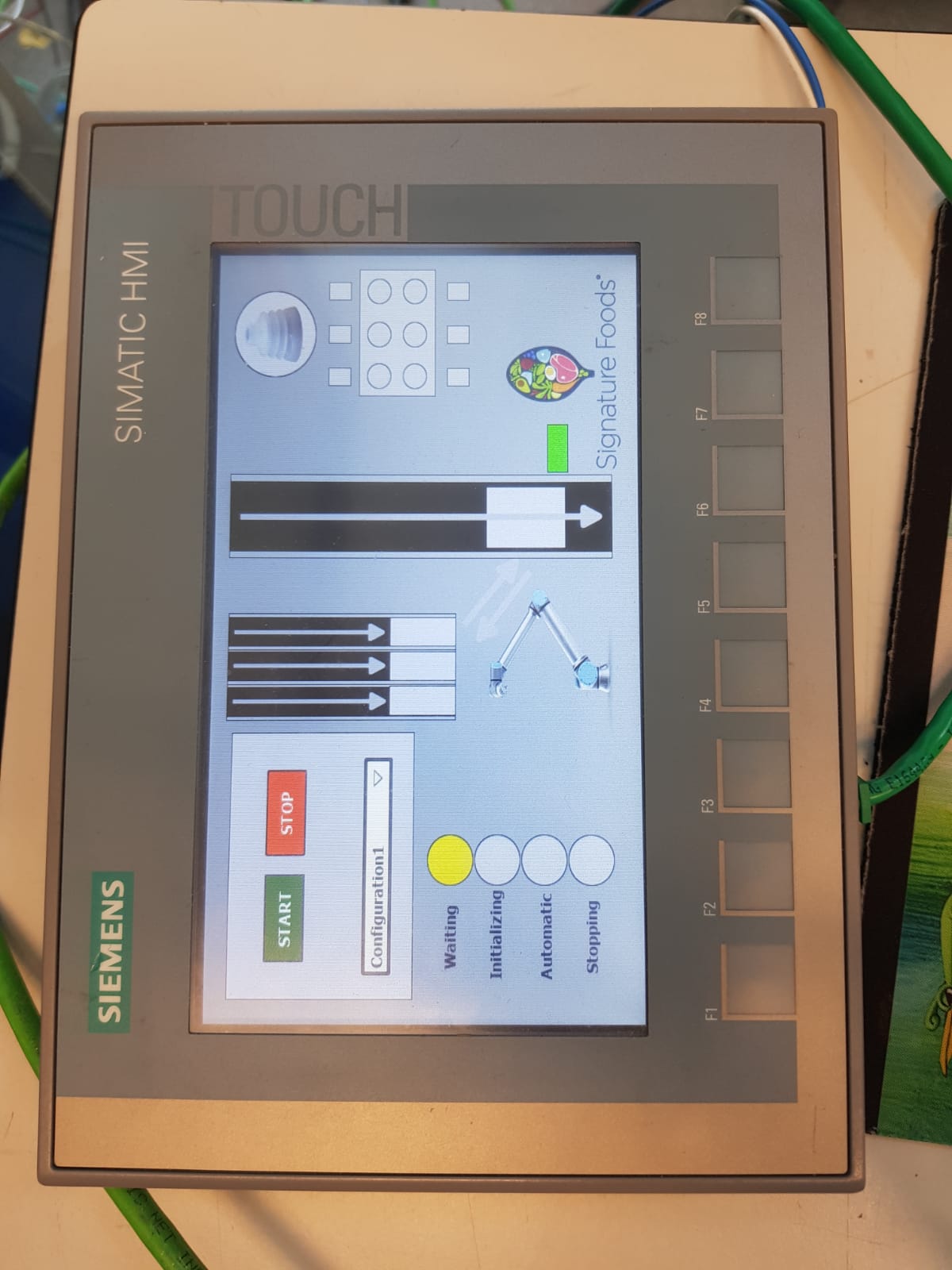 Major decisions during the project

The largest set of major decisions we made during the project was choosing the right hardware for the system.  This wasn’t just for a single component but for all of them. All the parts needed to work seamlessly together. This is why we chose to 3D print some of the parts.

We needed three small conveyor belts to supply the smaller supply boxes into the system. There were none available to our disposal, so we decided to make our own.

From the start it was already clear that it would be difficult to move a large mass with the robot. Given the limited speed of a collaboration robot, its limited lifting power and our goal of moving 60 salads per minute. We would need to move about six salads every time.

Our final setup was able to move 48 salads per minute and we were able to output 4 retail boxes per minute. In the image below, you can see our final robot setup as we made it in the lab.

We delivered our proof of principle, and we came to the conclusion that a delta robot would probably be much more suitable for the application. A delta robot is usually a lot faster and that is what’s most important in this application. The downside of using a delta robot, is that no humans are allowed near the robot.

The turning system we used on the end of arm tool works if more vacuum generators are used. Those were not available in the robot lab at the time of building the project. 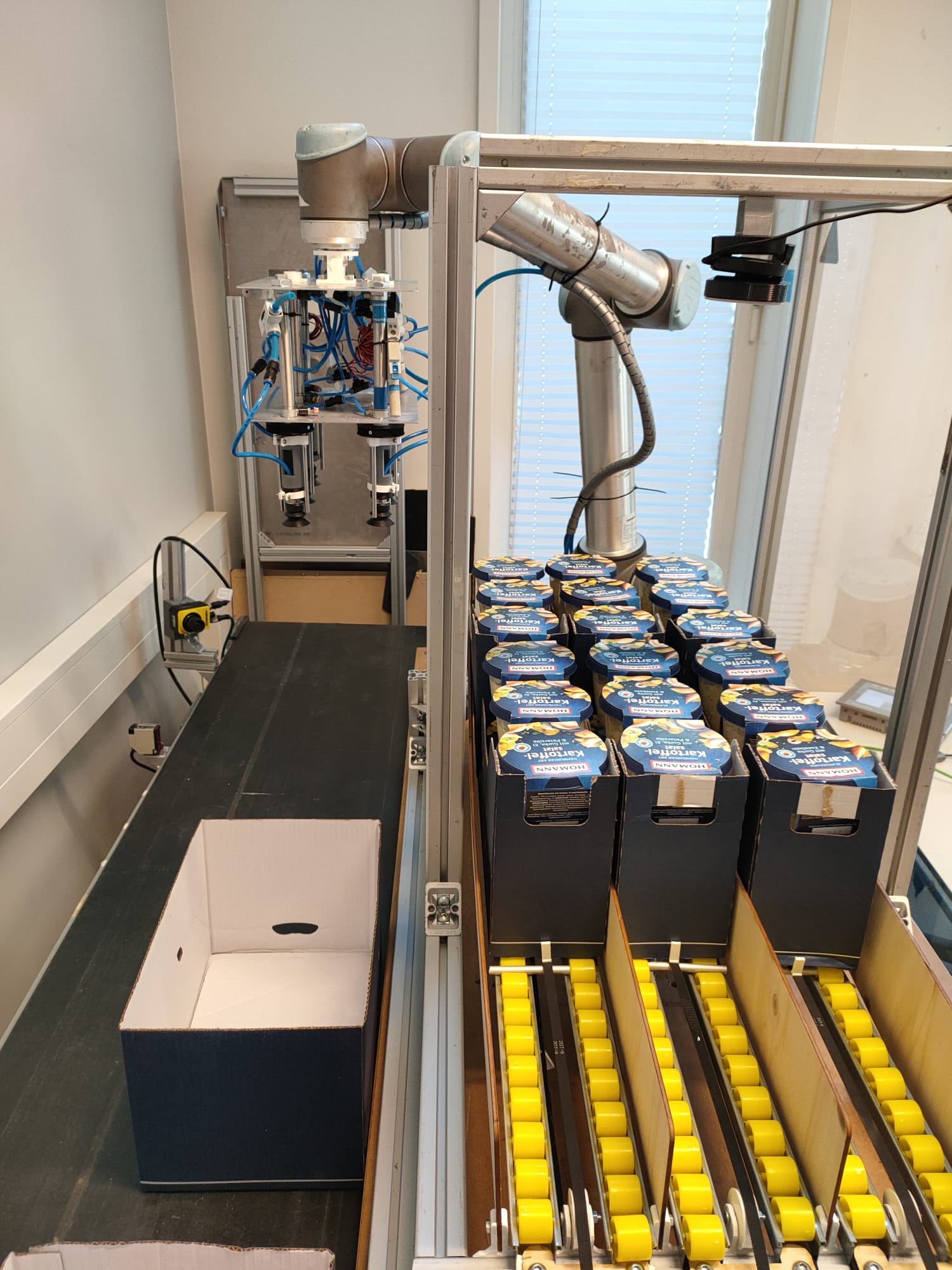 We would like to thank Daniel van der Woude for giving us this project and working with us. We would also like to thank Thijs Brilleman and Mathijs van de Vegt for the tech support during the project.

Find us on LinkedIn: