During the COVID-19 pandemic students of the Smart Manufacturing and Robotics minor were forced to work at home. After creating a React-native application two students from the old project team decided to go back to robotics. Long brainstorm sessions and much research on YouTube later the team found a perfect project:

The mechanical design is based on a two basic production-methods:
1. 3D-printing
2. CNC laser cutting

With these techniques in mind and the ability to buy some parts on the internet the project team started engineering. Rapidly after the start both the Z-axis (for vertical displacement) and XY-axis for horizontal movement had their initial designs. Many iterations have been done before reaching the final design which looks like this: 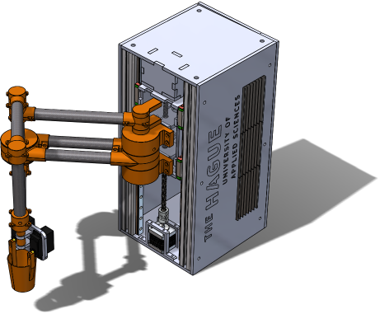 The timing belts used to drive the system have been concealed within the carbon tubes which form the arms. Because of this there are no belts visible at any time during the project. A special feature is that there is a belt from the base of the arm towards the end-effector, making sure that the end effector stays parallel to the base at all time.

For the product the team designed their own custom made PCB (Printed Circuit Board). This has been done to reduce the amount of wires for the project and to make sure that all connections are made properly. As a nice feature the project group decided to print the SMR-logo on the silkscreen and advertise the minor a bit. 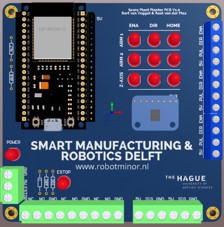 With this PCB the SCARA robot can be operated with the help of an ESP32 micro controller unit. The ESP32 is being used to drive control the three TB6600 stepper motor drivers, which in their time send the robot to the desired destination. For control the project team decided to go with counting steps (in stead of working with something like an encoder). Although counting steps might not be the most accurate process, it is for sure the cheapest.

The software of the SCARA robot is based on the AccelStepper library that’s available within the Arduino IDE. This library is able to do (almost) anything you want with a stepper motor. For this project it was extremely useful when sending the robot from location to location and while doing that, making use of the acceleration and braking of the motor.

After booting the system the first thing the SCARA robot wants to do is home itself. Homing of the robot gets done by physically pressing three micro-switches (one per arm and one for the z-axis) after each other. Once all three switches have been pressed the SCARA robot gets in position for the pick-and-place cycle. As seen in the video above, the project team reaches a high repeatability when homing the SCARA. While testing the SCARA proved itself being constant by succeeding ten homing cycles after each other.

The pick-up and drop-down locations have been hard-coded. The angles of the arm to reach a wanted destination were found using inverse kinematics for a double pendulum. During the project, the project team simulated the maximum reach of the SCARA robot and placed the cuttings tray and salable pots within this reach.

At first the second arm gets calculated, which causes there to be a value for q2 to be filled in to calculate the angle for the first arm of the SCARA robot.

From this project we can conclude that it definitely is possible to build a low cost custom SCARA robot. To realize the design some smart thinking is possible and it’s very desirable to have access to fast/accurate prototyping resources (e.g. water-jetting or resin printing). Because of the delay of some of the orders due to COVID-19 the project team had to improvise while building the arms of the SCARA. They did this by using PVC tubes that are taped with electrical tape at the ends. This worked fine for a day during the build, but when the SCARA was assembled a bit longer the arms started to sag a bit. In the video this was fixed by some rubber bands. This was not a permanent fix.