Ter Laak orchids
Ter Laak Orchids was founded in 1954 and is currently being run by the brothers Eduard and Richard ter Laak. In two nurseries in Wateringen, they grow around 6 million Phalaenopsis plants a year for garden centers, florists and retailers throughout Europe.

The problem
The project is about placing a stick next to the stem of an orchid. The orchids come in without sticks, the workers place a stick next to each stem and clamp the stick and the stem together to let the orchid grow straight. Our task is to automate this process.

We need to detect how many stems there are and how long they are. Then insert the right amount and the right size of sticks next to the orchid.

The original situation
In the original situation, the orchids come in on a conveyor. The worker checks which length the stick should be and insert the right stick next to the stem. There are four different lengths of sticks, the lengths vary between 50 and 80 centimeters. 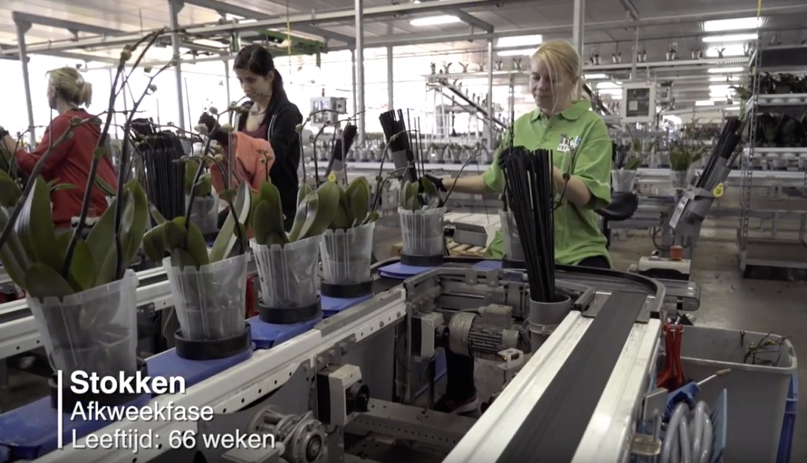 Solution
Our system is divided in multiple subsystems consisting of a conveyor belt, Kawasaki robot with an end of arm tool, PLC, HMI and two Intel SR300 cameras.

The PLC drives the system, it’s connected to the vision system, the robot and the HMI. The HMI sends signals to the PLC to start the program or to manually control the system.

We’ve made three stations. Station 1 is the vision station, where the orchids are scanned.
station 2 is the sticking station where the Kawasaki robot dynamically insert sticks next to the orchid. Station 3 is the buffer. When the process is done, the orchids go to the buffer where we can stack up to 5 orchids. 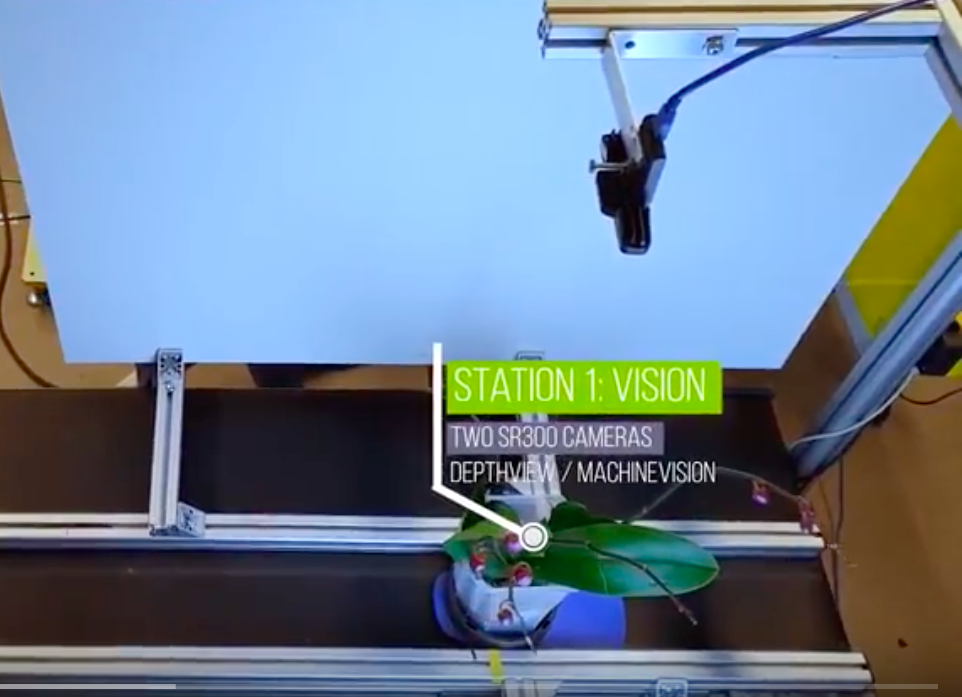 To insert a stick in the right position we made a vision system using two intel SR300 cameras. These cameras do not only take a color image but also a depth image. We use image processing and machine learning to determine how many stems a plant has and what the optimal location is to place the sticks.
The cameras are triggered when the plant on the conveyor hits the first sensor. The conveyor will then stop and will wait until the vision system is done. When the plant reaches the second station the Robot will receive the coordinates from the vision system so it knows where to place the sticks. Finally, the plant continues
to the buffer.

The sticks are stacked in the stick feeding system where we can stack up to 35 sticks.