The goal of this project was to upgrade the system that was built in the previous SMR period (Link to previous project). Back then, a system was created for picking-up kalanchoes (type of plant) from a conveyor belt, putting  them into a tray by using a Universal Robot and checking their placement with a Vision system. The system was designed for the company SV.CO. The goal was to be able to fill more trays with potted plants within the same amount of time. Currently, three employees at SV.CO put kalanchoes into trays by hand. With so few hands for the job SV.CO is not able to meet their goal regarding filled trays per hour.

The previous system was already a remarkeble improvement for the production line at SV.CO in terms of enabling them to reach their production goals, and both Martin Stolze and SV.CO were enthusiastic about the system. However, there were still a few challenges to manage. 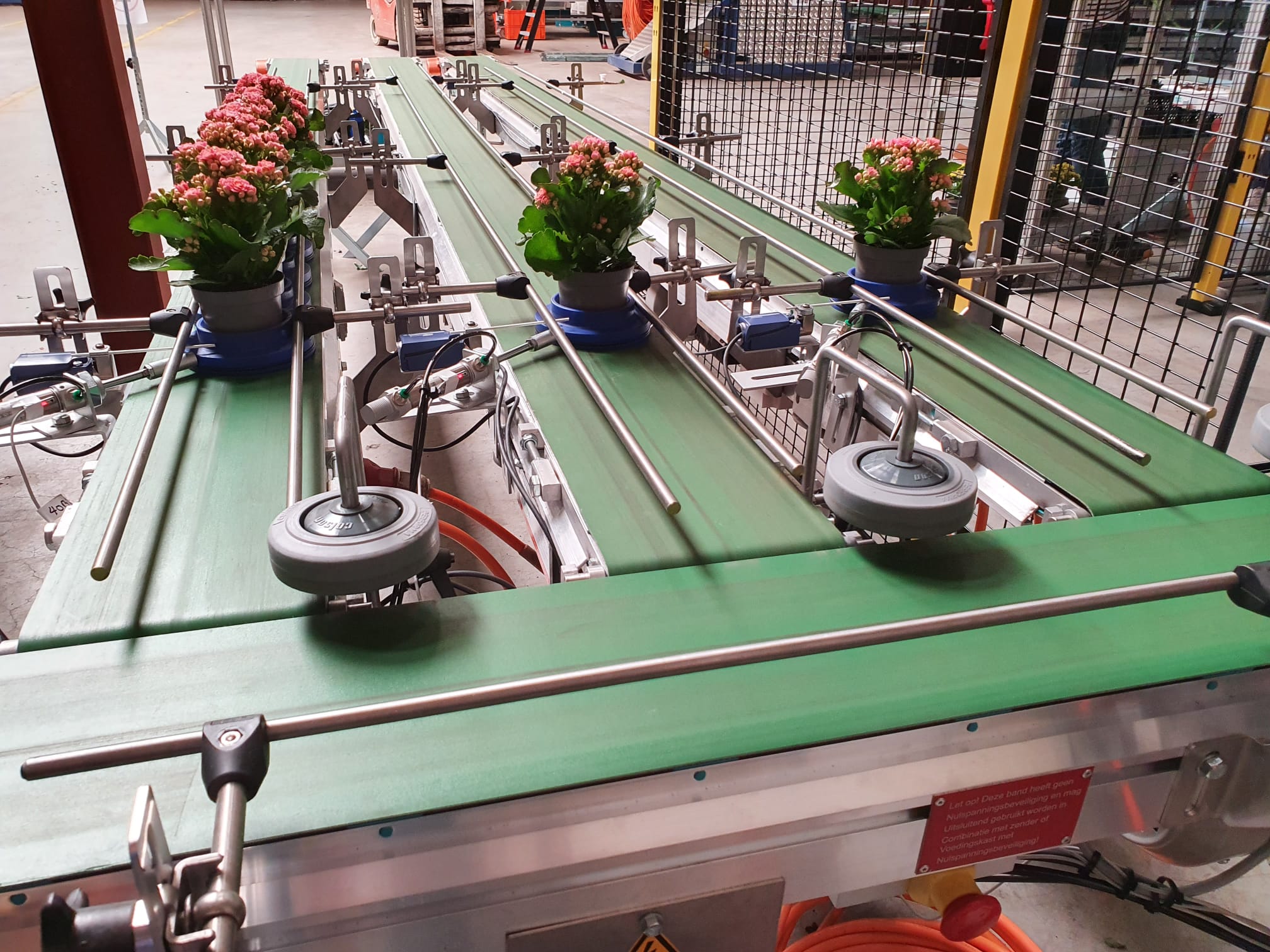 The plant separator consists of two separate screens that can move down and rotate 90 degrees. The screens will be dropped and laid down on top of the tray. After that, a row is being placed. Before the next row can be placed, the screen moves upright (90 degrees). This ensures that the leaves of the already placed potted plants are protected when a second row is placed. The same steps apply to the second row. After the third row is placed, the screens go up and the tray can pass on to the next module. 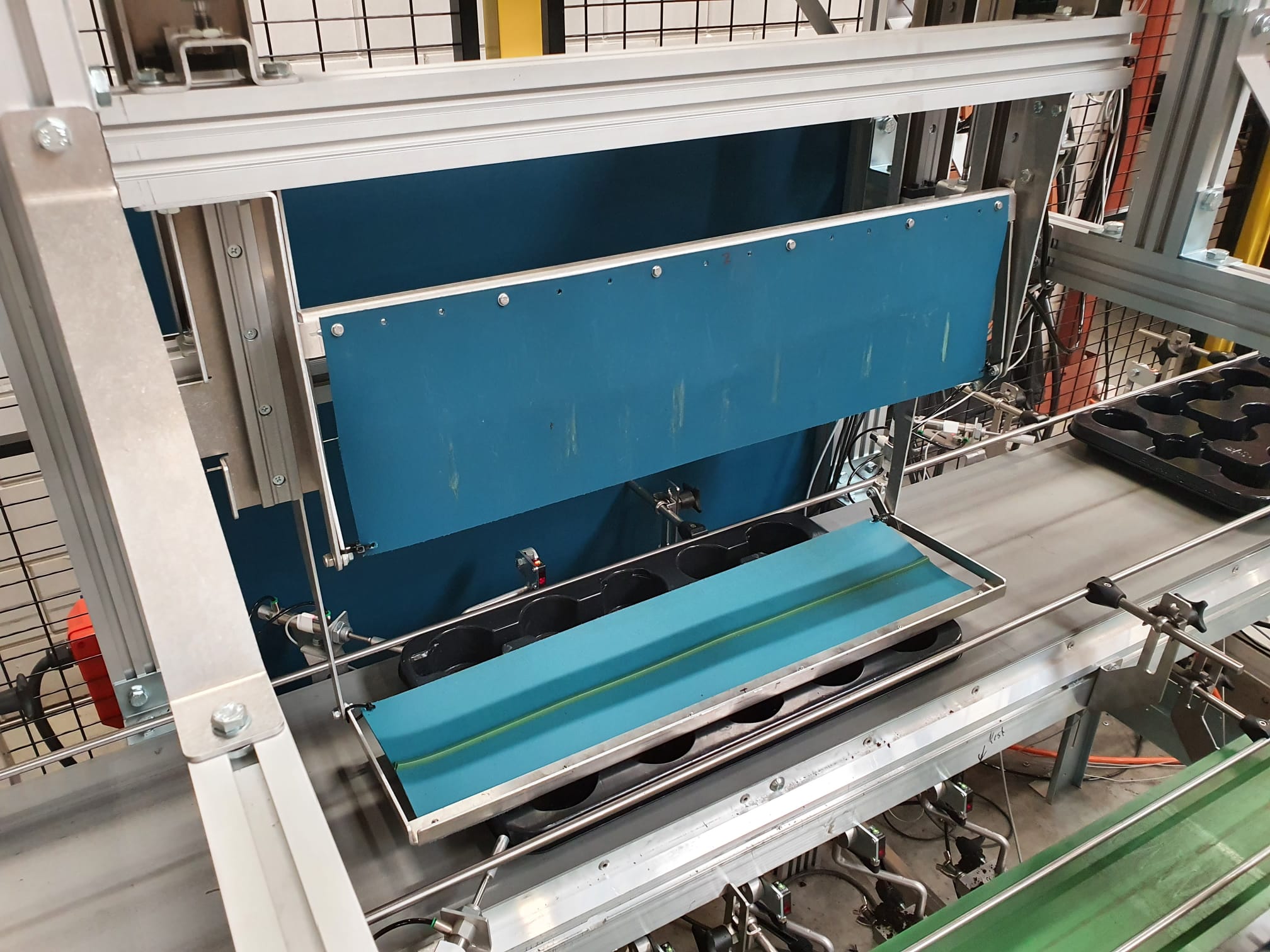 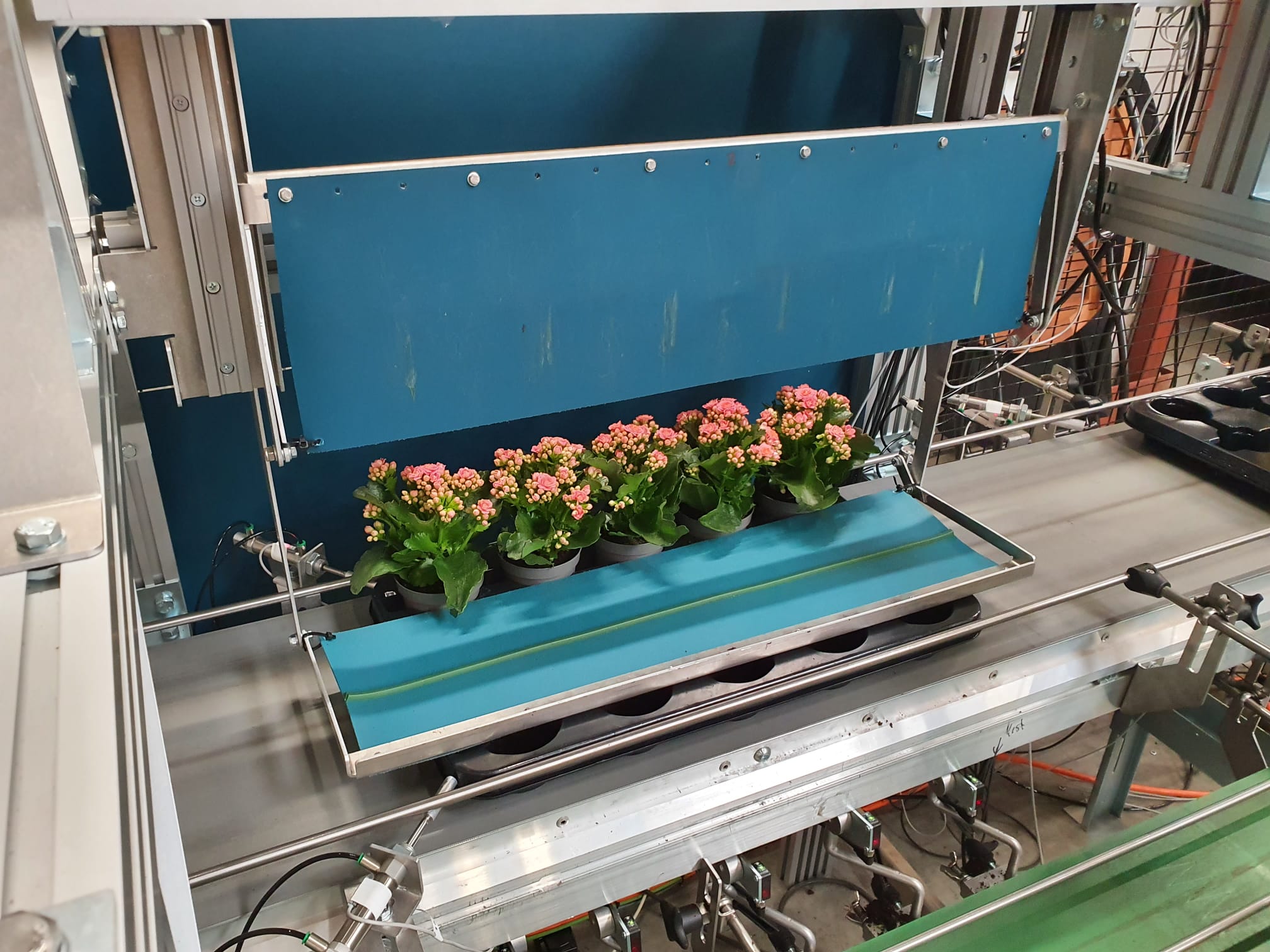 The Vision System uses Machine Learning to detect the correct placement of the pots. All unrecognized pots are by default marked as misplaced or empty. The vision system consists of one Intel RealSense camera and eight 3x3mm LED’s. The camera is connected to the end-of-arm-tool (EOAT), which is placed at the end of the robot-arm. The EOAT also contains the eight LED’s, which are used to apply extra lighting to ensure that there is always enough light to detect the pots.

The robot buffer collects all the plants coming from the general buffer (Module 1) to the robot. After five potted plants are picked-up, the product carriers move out of the system, and five new plants come in. 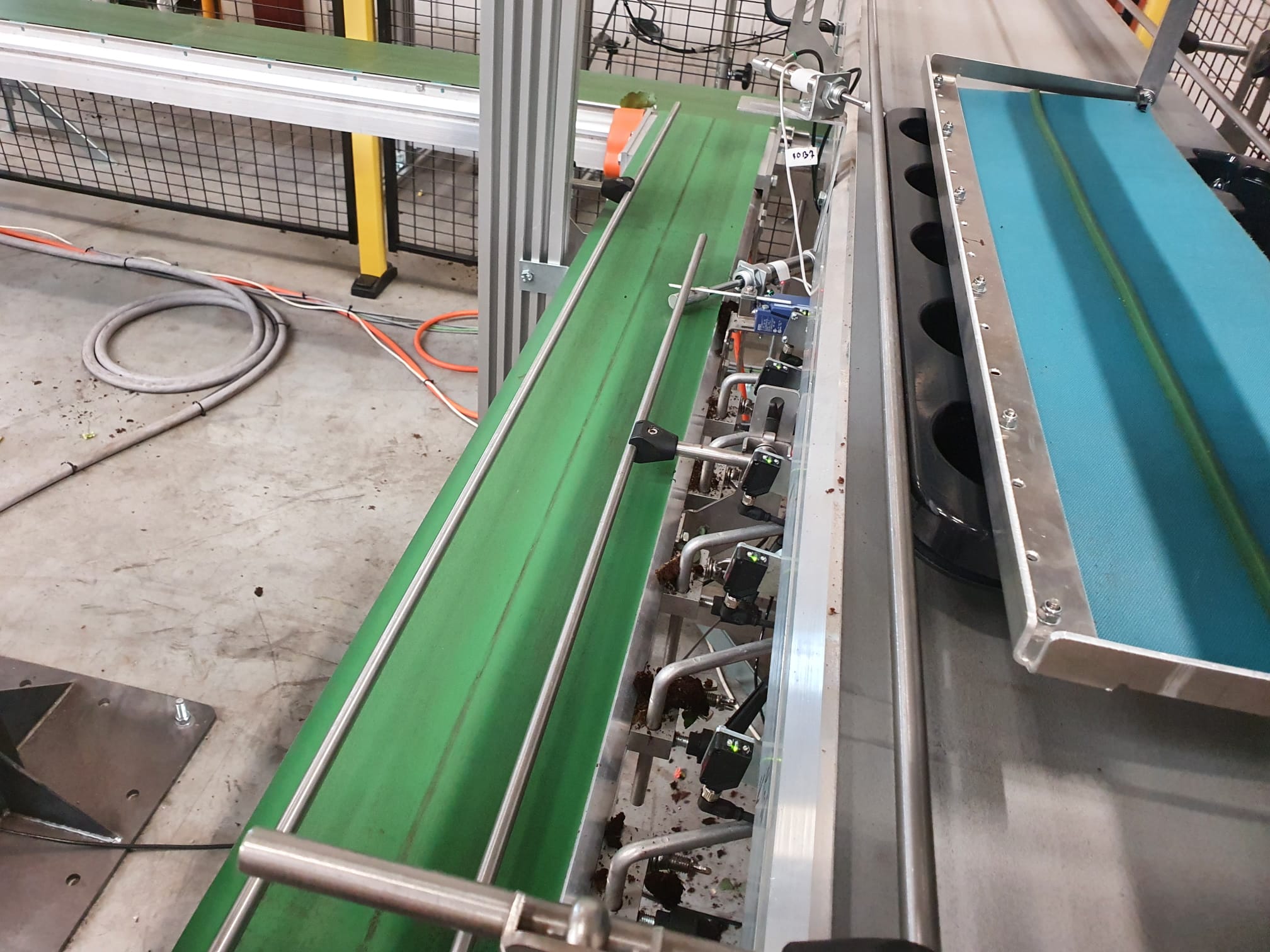 The EOAT makes certain movements without damaging the leaves of the kalanchoes.

In this project an ABB-Robot has been used for the movement from the plant buffer to the tray. Using the robot means that, the system is easy adjustable. If a customer wishes to use different trays or different product carriers, the system can be easily modified and still be used (customer requirement). With other types of robots, e.g., a gantry robot, this would have not been possible. 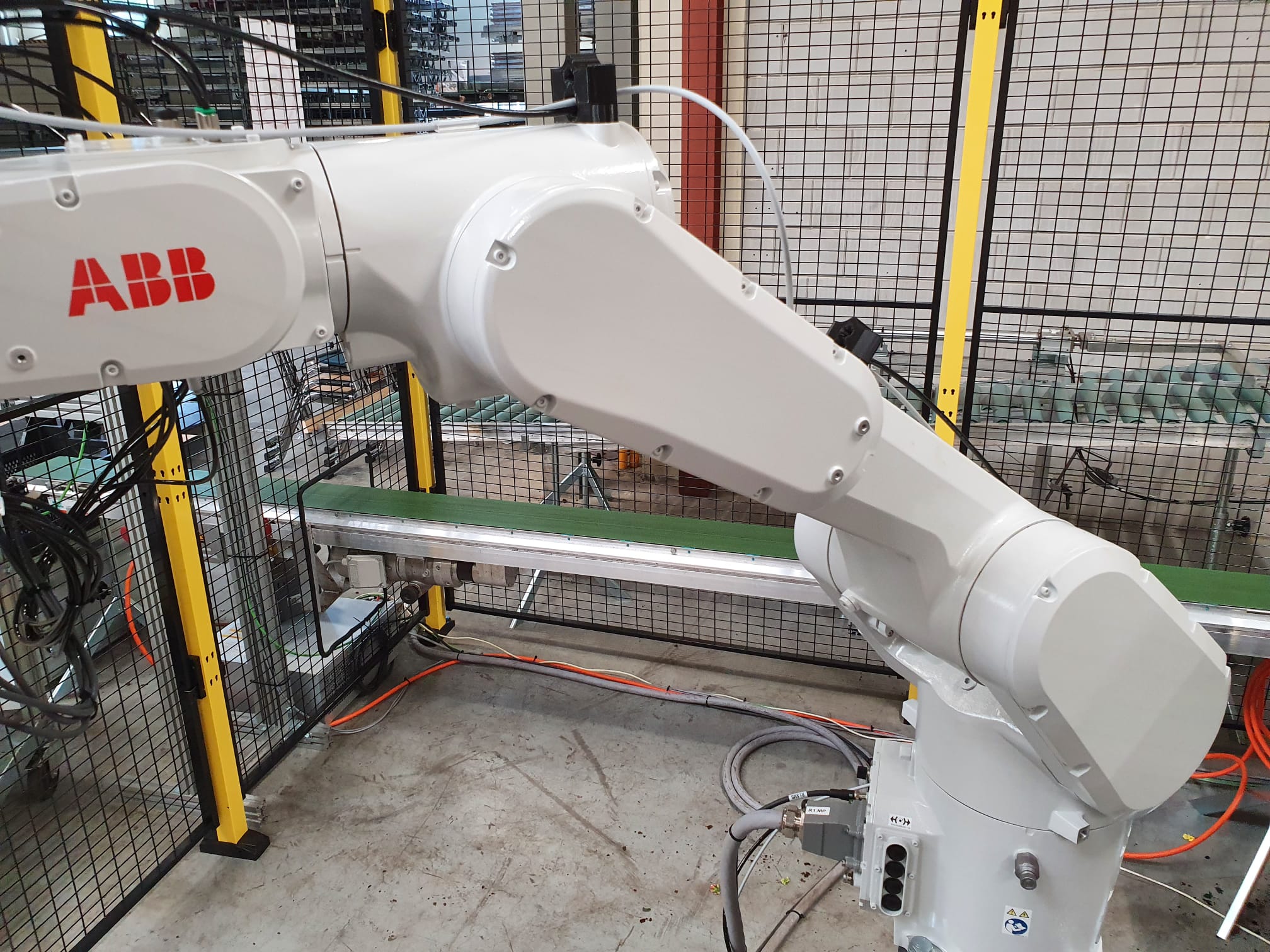 The tray buffer system consists of two pistons one on both sides of the conveyor belt. These pistons stop incoming trays before they move on to the plant separator. 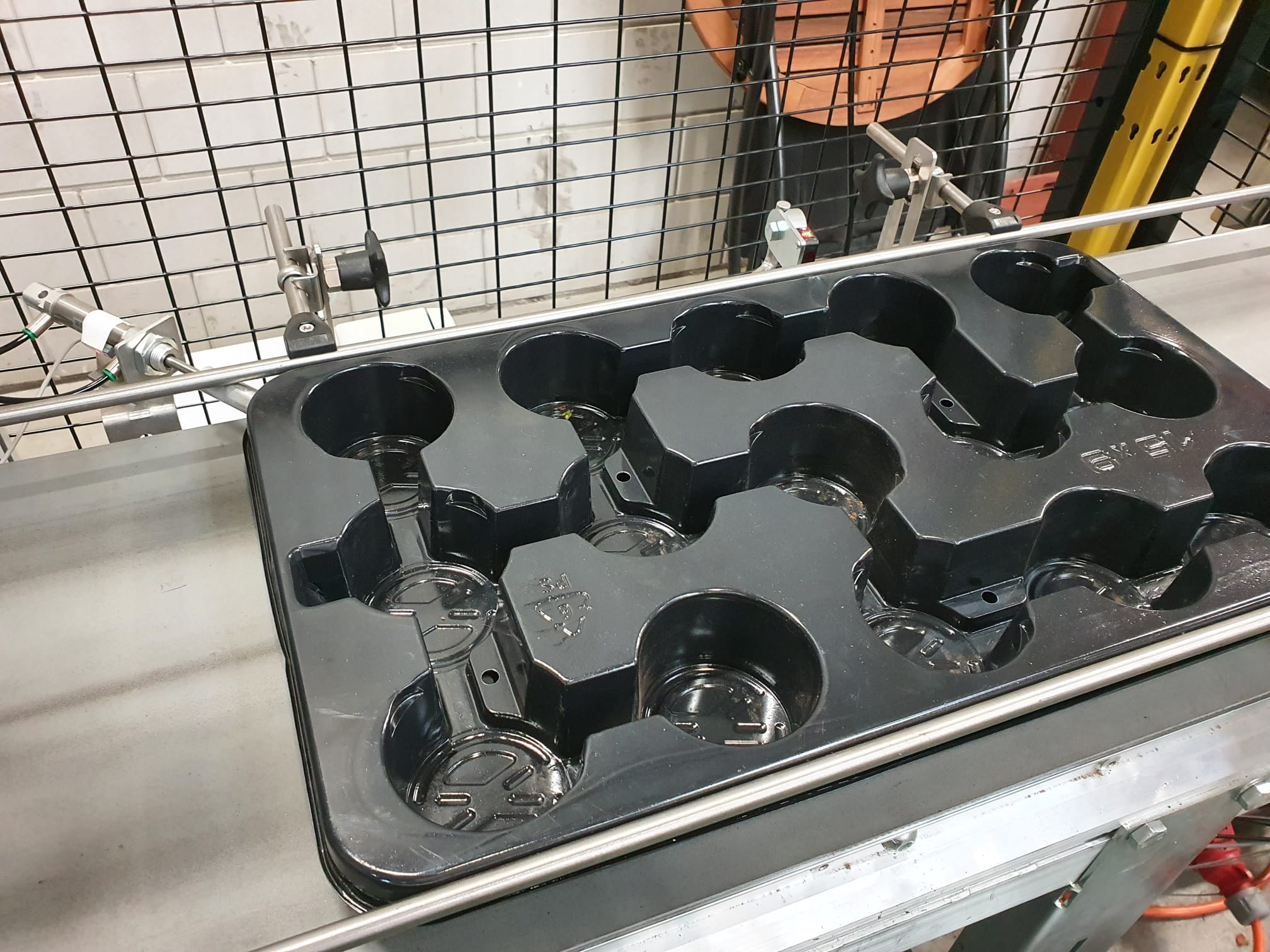 In the early phases of the project, we decided to spend a lot of time on conceptualising ideas to prevent leaves from being damaged. Because we spent a lot of time on solving this challenge, we came up with both feasible, effective, and efficient solutions. These solutions ensured that our current system barely damages any leaves. Besides that, we also decided on using the EOAT to fix the distancing problem instead of a separate system.

As a group, we are overall very satisfied with our achievements and results in this period of seven weeks. Also, we appreciate the amount of support and resources we have received from Martin Stolze B.V.. We had a lot of freedom building this system and had lots of resources available from the company.

Martin Stolze B.V. has expressed great satisfaction with our result. The system is efficient and works very well. From our perspective, we estimate that it is almost ready to be used at SV.CO’s production line. However, before applying it to SV.CO’s production line, we still recommend further improvements regarding the vision/Machine Learning. overall, the system albeit works well, particulary considering the relatively little knowledge and time we had available for the project.